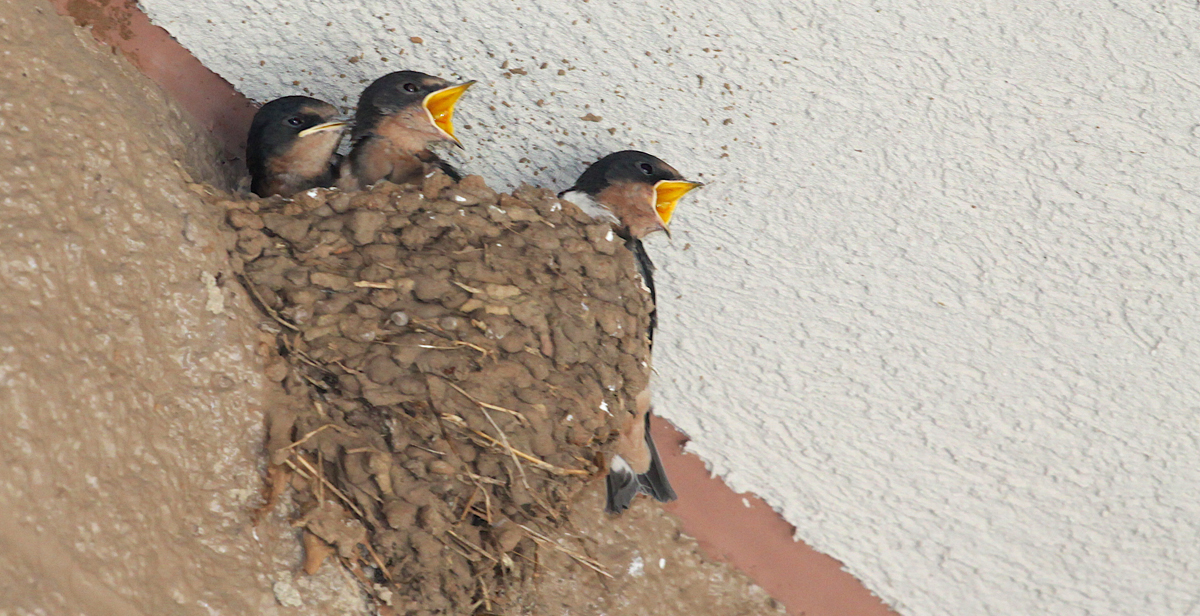 We read with great interest the article on replacement nesting habitats for barn swallows. We were laughing out loud and shaking our heads at the arrogant hubris of those who would keep building structures that don’t work. Maybe they should have put up a sign (“Swallows Nest Here please”). We have seen some unexpected examples of nesting adaptability by birds such as gulls and geese nesting on the roof of a building so maybe it’s just a matter of time before the structures attract more swallows. However, perhaps the nesting activity is a key behavior needed for successful breeding and this may explain why the pre-made nests were unsuccessful. Expecting birds to discern advantages to their energy budget in the short term by not being forced to build a nest may be a bit far fetched but nevertheless the desired effect might eventually occur through group behavior adaptation. We offer the observation that swallows do well by nesting on overhanging floor joists of yacht clubs and restaurants that we visit in our trips around Lake Ontario. These structures look much like the underside of a house floor seen from an unfinished basement. The swallows happily build nests stuck onto the vertical surfaces – year after year. These inadvertent habitats are successful at producing swallows so perhaps they should be experimentally copied instead of hoping ersatz micro barns or other fanciful notions will replace lost habitat.

You’re right – there may be an element of hubris involved in attempting to discern the nesting needs of barn swallows and perhaps there’s some truth to the suggestion that the act of building a nest may stimulate breeding. That said, attempting to offer the swallows alternate nesting habitat began as a desire to do the right thing and some structures have attracted some swallows. Crucial though, as mentioned in the article, is comprehensive monitoring of these barn swallow structures (kiosks) and then attempting to tease out the factors that lead to nesting success. And… if the data reflects general failure, perhaps abandoning the practice of building these structures, in favour of other conservation initiatives. I worry that erecting the structures projects a false impression of success. “Hey, we’ve lost all those old barns, but look at these beautiful custom-built swallow kiosks!”

I think we’ll eventually realize that the richness of the environment surrounding barn swallow nesting habitat… especially its ability to generate insect life, is the main driver of barn swallow presence. Barns with thriving nesting colonies are usually found on working farms with an abundance of insects associated with manure and livestock. Similarly, the successful sites you mention are located beside water courses and likely benefit from the hatches of insects that arise from that water.

Thanks for your feedback,