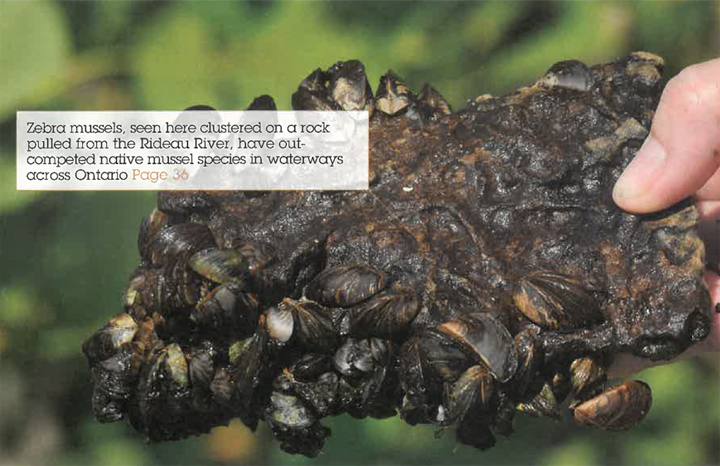 5 | This Issue
The Decline of Biodiversity: Conservation efforts should be proactive for a change.
By Caroline Schultz

40 | Bird Watch
Canada Warbler: The country’s namesake warbler is one of the nation’s fastest dwindling migratory songbirds.
By Tim Tiner

46 | Last Word
How to Start a Fire: Farming communities are fanning the flames of a new environmental movement that protects both farmers and habitat.
By Bryan Gilvesy

16 | The First 10
A list of high-priority species fast-tracked for protection under the new Endangered Species Act.
By Tim Tiner

On the cover
18 | Last of the Caribou
We are witnessing the disappearance of the “grey ghosts” of the boreal forest. If industry and logging continue to carve into caribou habitat, Ontario’s most elusive of big animals may be gone by the end of the century.
By Ray Ford

24 | Seeds of Hope
The University of Guelph Arboretum provides a safe haven for our rarest trees.
By Allan Britnell

30 | The Way of the Lizard
And the massasauga and the wood turtle, along with most of our reptile populations, now in decline due to habitat fragmentation and loss, roads, poaching (turtles) and senseless killing (snakes). Is it too late to bring these cold-blooded creatures back from the brink?
By Douglas Hunter

36 | The Mussel Crisis
A small band of committed researchers is determined to save Ontario’s freshwater mussels — critical to the health of aquatic ecosystems — from local extinction.
By Moira Farr