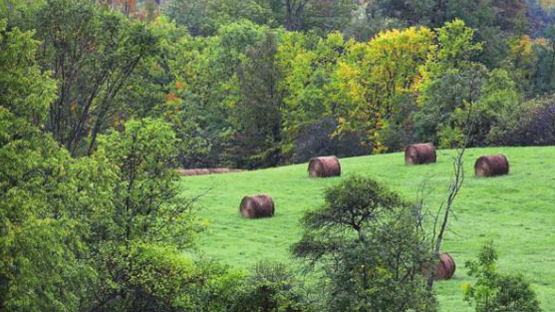 With regard to the photo on the title page of the article “Cutting Edge” in the Spring 2016 edition of ON Nature:

I am a farmer, and I can recognized good — and bad — haying practices when I see them. The aforementioned photo illustrates a number of bad haying practices. The hay is not the soft green or slightly golden colour of recently baled hay; it is the black and brown of hay gone moldy. I note that the trees are starting to change colour, indicating that this picture might have been taken in September. The grass in the field is starting to grow up around the hay bales, indicating that the field was cut several weeks earlier — possibly in late July or in August. Yes, that will be beneficial to the song birds, but the hay will have lost much of it’s nutritional value at that late date. It is also likely to be rotting from the ground up as well as from the top down, after having sat out in the field for such a prolonged period. I also see a row of hay bales stacked up against the far tree line. Likely they have been removed from the field and stacked there to rot away, as they are probably unfit for any type of animal feed.

What I see in the picture is not an effort to spare song birds, but hay management gone wrong, resulting in tons and tons of wastage. The author of the article advocates an activity stream that will be beneficial both to song birds and to the bottom line of the farming operation. Wastage of a commodity is not good economics.

Letters to the Editoragriculture, Birds on the farm, bobolinks, hay