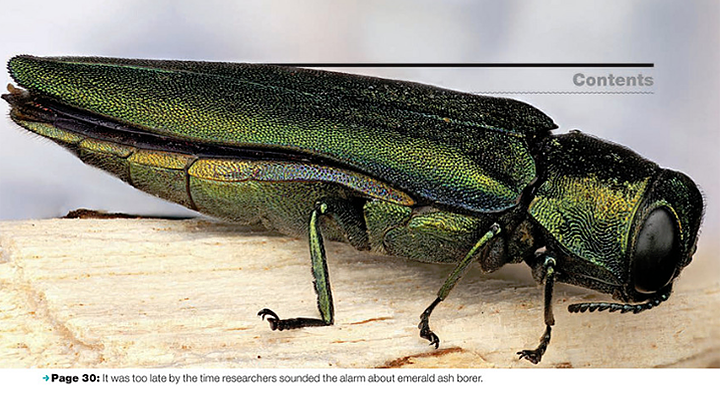 5 | This issue
A time of rejuvenation.
By Caroline Schultz

35 |Our Member Groups
A golden jubilee.
By Lisa Richardson

On the cover
18 | On the Trail of Adventure
In the decade since designating the whip-poor-will a threatened species, the Ontario government has done little to halt its decline. Yet, without the bird’s call, Ontario outdoors would not be the same.
By Brian Banks

24 | Here Today, Gone Tomorrow
Each spring, vernal pools serve as nurseries for frogs and salamanders before drying up from the summer heat. But warming temperatures and human activity are shortening the already brief lifespans of such pools, potentially spelling doom for woodland amphibians.
By Patricia Hluchy

30 | The Great Invasion
An army of foreign pests, from emerald ash borers to Asian longhorned beetles, is attacking Ontario’s trees. The latest incursion, by an insect that kills hemlocks, could devastate entire ecosystems that depend on these trees – unless a defense is mounted quickly.
By Conor Mihell